With the main aims of spreading the Word of Satan and raise Torment over this Earth, Corpus Christii have been releasing works of audio terror since 1998. Being the first Portuguese Black Metal band to expand internationally in a broader way than what has been done before, Corpus Christii have reached out to a vastly extended audience on all continents through their several outputs and numerous live-gigs over Europe.

The back-catalogue consists of 16 releases in various formats (tape, CD, vinyl) of which eight are full-length albums. The band has passed through different Eras of creation, the first one spearheaded by “Saeculum Domini” in 2000, a testimony of the group’s most primitive and caustic side. Impactful concerts followed and waves were stirred in the Portuguese scene, the momentum set for the second full-length to flourish, 2001’s “The Fire God”. More technical and further expanded yet still engraved with the cruelty of the debut, “The Fire God” carved Corpus Christii’s thrust like a sharp dagger of diabolic Black Metal. Between EPs, a conceptual compilation blending covers and originals and Split releases with fellow hordes, the time was nigh for the most challenging body of work to date: the “Torment” trilogy”. With widening dynamics and symbolisms throughout the lyrics and music, “Tormented Belief”, “The Torment Continues” and “Rising” were spawned between 2003 and 2007 and consolidated Corpus Christii as a force to be reckoned with, both in Portugal as well as internationally, through several live rituals performed abroad including esteemed festivals such as Under the Black Sun, Hell’s Pleasure and Kings of Black Metal. The definite success of “Rising” attracted a broaden and general interest for what the band would come up with next, thus four long years later “Luciferian Frequencies” was summoned. Released by Candlelight Records, this new tome presented a progression in Corpus Christii’s sound, less musically devastating than the “Torment” trilogy yet farther somber and sinister in its slower and mid-tempo malice, nonetheless never neglecting the faster most abrasive character of the band. Another four years of spreading Chaos in His name followed and 2015 saw the release of “Palemoon”, the first of two full-length releases on Folter Records. A return to rawer more belligerent aural dread marks the band’s seven full-length. Corpus Christii sound hungrier than ever for straight Satanic fervor in ten fast, violent hymns of utter Black Metal hatred. This passion and thirst made room for inspiration to flow and 2017 witnessed the unveiling of “Delusion”, a triumphant conglomerate of the group’s facets, from rabid discharges of hate to obscure dissonant passages, all carved with Corpus Christii’s very touch on what is lyrically and musically one of the band’s strongest releases.

Like a wolf that thrives alone against the feeble ways of the degenerate human, signaling the death of the Black Metal ethos as it once was, Corpus Christii strives forward as the time has come for the ninth record to arrive, a sword of Death and Satanic might against the modern world in the form of sinister Black Metal art. Joining close comrades from entities such as Azaghal, Frostmoon Eclipse and The Stone, Immortal Frost Productions is the band’s new label, a relationship based on utter dedication and allegiance to the true spirit of Black Metal. The future is tainted by our impending doom and Corpus Christii doesn’t hide from it but rides through the eye of the storm hailing “The Bitter End of Old”! The band their ninth full length album “The Bitter End of Old” has been brought to light in May 2022 on CD, Vinyl & Digitally.

All Releases by Corpus Christii 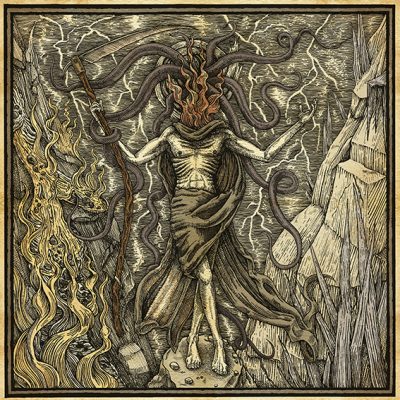